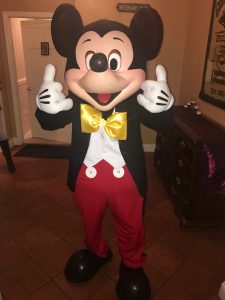 Make your child’s party even more exciting by having a appearance by his or her favorite character!  Nothing is better then the look on ts faces as their favorite character comes walking in.   Our performances include games and dancing with the kids, pictures taken by your guests and balloon sculpting.  Our high end costumes will not disappoint.

Meet & Greet is a 30 minute appearance of just the character for pictures, hugs & high fives. This is best suited for events with only a few children or for families that are only looking for a photo ops with one of our characters.

Full Musical Appearances consists of a 30 minute musical appearance with our supplied sound system & pre edited music for the character, a additional staff member outside the costume for guiding the children thru the show, dancing, parachute games & photo opportunities.  After the 30 min musical character appearance the character leaves and then the staff members come back to do balloon sculpting with the children.  The Full Musical Appearance has a show run time of one hour including the balloon sculpting.

Super Hero appearances have two staff members, (one in the costume and one outside the costume) music and a sound system and last one hour.  Our announcer introduces the character to music then guides the children thru a super hero training session.  During the appearance there is dancing, lots of participation and tons of photo ops.  These appearances are high energy and your guests will be amazed with the detail and quality of our costumes.

Princess Appearances have two staff members, (one in the costume and one outside the costume) music with a boom box and last one hour.  Our princess perfomer sings with the children, plays games with the children like freeze dance, parachute play & limbo and of course takes lots of pictures.  The children will love the magical interactions with our princesses and your guests will be amazed at the quality of our costumes.